I read this news last month and I’m eager to know more about what kind of creative work artist Julius von Bismarck, the winner of the Collide@CERN prize, will present on his experiences at the laboratory in September.

From the article published by Symmetry Breaking Magazine:

If attendees at the welcome reception for CERN’s first artist-in-residence learned one thing last night, it was that Julius von Bismarck is not afraid to disrupt others with his art. In a way, this trait puts him right at home with CERN scientists: the kind of people who always question, the kind of people who fill an auditorium to discuss the possibility that a long-held law of physics could be broken. But von Bismarck is not a CERN scientist. So inviting him into the laboratory, where he will stay for the next two months, is a sign of trust – not that he won’t disrupt the scientists, but that, if he does, the experience could be worthwhile […] Von Bismarck, 28, has used invention, experiment and, in many cases, the participation of an unsuspecting crowd to address questions about how we interact with the world around us. In 2006, he created a white, spherical helmet that blocks the wearer’s view of anything but a live video feed from a camera attached to a balloon overhead. “It totally changes your perception,” von Bismarck said. At last night’s reception, he showed a video of himself walking through Berlin’s central train station wearing the contraption. “After a while you get used to it,” he said. “What never goes away is the shakiness. The world is losing stability.”

Art and science, isn’t that exciting?! 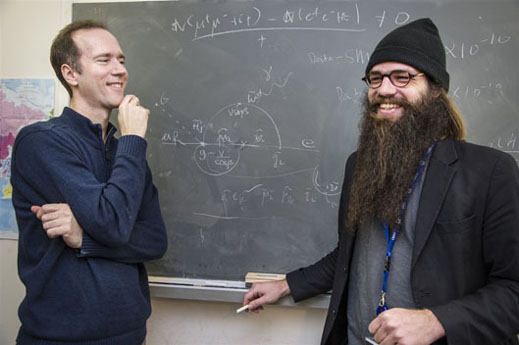