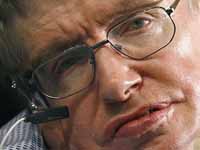 Stephen Hawking has a motor neurone disease related to amyotrophic lateral sclerosis, a condition that has progressed over the years.

He currently communicates using a series of cheek twitches to select words from a screen. “It is a very, very slow process,” says Philip Low at Stanford University in California, who is founder of healthcare company NeuroVigil. More from the article on New Scientist:

As Hawking loses control of his cheek, Low hopes he might instead communicate using his company’s portable device. The iBrain records brain activity from a single point on the scalp. An algorithm then extracts useful information from this activity.

In a preliminary trial, Low’s team asked Hawking to imagine moving his hands and feet while wearing the device. They were able to identify what movement he was imagining through changes in his brain activity.

Survival for more than 10 years after ALS diagnosis is uncommon. Stephen Hawking is an amazing scientist and a figther. Let’s hope this new portable device will let him ‘talk’ again…