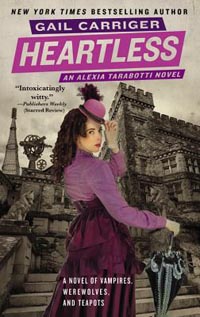 Among the books I brought with me outer Space, there is Heartless: The Parasol Protectorate: Book 4 by British author Gail Carriger.

Lady Alexia Maccon, soulless, is at it again, only this time the trouble is not her fault. When a mad ghost threatens the queen, Alexia is on the case, following a trail that leads her deep into her husband’s past. Top that off with a sister who has joined the suffragette movement (shocking!), Madame Lefoux’s latest mechanical invention, and a plague of zombie porcupines and Alexia barely has time to remember she happens to be eight months pregnant. Will Alexia manage to determine who is trying to kill Queen Victoria before it is too late? Is it the vampires again or is there a traitor lurking about in wolf’s clothing? And what, exactly, has taken up residence in Lord Akeldama’s second best closet?

Alexia is witty, she has a strong character. Author Gail Carriger knows how to entertain with this paranormal Steampunk Britain series of sci-fi or vampire books.

No wonder why it’s subtitled: ‘A novel of vampires, werewolves and teapots’. The first book of the series, Soulless, won the ALA’s Alex Award and a manga version was even released in March 2012.

I would like to tell you more about this series and the other ones but you really have to read those books to know. Here is the list:

– The Finishing School Series: first book Etiquette & Espionage due out Feb. 2013 with three others to follow.

And of course, visit her website for more information!