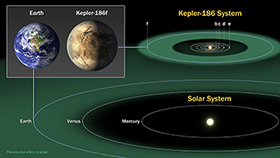 Max Von Sama's Journey to Kepler started in April, 2014 when NASA's Kepler Space Telescope discovered the first Earth-size planet orbiting a star in the "habitable zone" -- the range of distance from a star where liquid water might pool on the surface of an orbiting planet. The discovery of Kepler-186f confirmed that planets the size of Earth exist in the habitable zone of stars other than our sun. (Read full article here).

In just a few days, Max packed her things and left the Earth for an exciting new adventure to explore time and space across the Many Worlds, on board the Photon fueled Sama Airship investing the Fermi Paradox, using the Antikythera mechanism...


I use the #Antikythera mechanism to travel, a mysterious #Retrofuturist #Steampunk device! https://t.co/D5ib1PF5aS pic.twitter.com/eqENPKp447


She traveled for months, and she crossed path with beautiful galaxies and dangerous black holes...


How to start a day! An anomaly happened, the Sama Airship has gone into safe mode… Was it because of the nearby black hole? #JourneytoKepler


But even when she avoided black holes, radiations were always near by...


Yesterday we approached too close to a micro #blackhole and #Hawking radiation interfered with my communication… So here's my late #FF!


During her journey, and despite her hope and optimism, she had to face the facts: the Fermi Paradox was true...


Since I started my #JourneytoKepler, I've never seen anyone… Even though I feel observed. Fermi Paradox at its best! https://t.co/mrnanmSHoO


The Fermi Paradox is a conflict between arguments of scale and probability that seem to favor intelligent life being common in the universe, compared with a total lack of evidence of intelligent life having ever arisen anywhere other than on the Earth.


Then on July 2015, a great announcement lead by the even greater Stephen Hawking, has been made: the Breakthrough Listen initiative was unveiled on Monday 20th of July 2015 during a webcast from the Royal Society in London. (Read article here.)


A very exciting news. Because if Max never encountered anything or anyone (yet) during her space travel, she often had the feeling she was being observed...


Since I entered the Cygnus Constellation, the more I'm getting close to #Kepler-186f, the more I feel like someone is watching us… #Journal


As Kepler-186f was finally in sight, she couldn't miss Asteroid Day and celebrated it from outer space!


But space travel has its ups and downs, and machinery doesn't always work as expected. Hopefully, nothing serious happended so far...


The Sama Airship had a problem today, the system rebooted twice. Everything's working fine now. Kepler-186f should be in sight by tomorrow!


And on July 14th, NASA made a huge announcement: NASA's New Horizons probe has lifted the veil on Pluto! The close encounter gave researchers their first up-close looks at Pluto, which has remained mysterious since its 1930 discovery... (Read more here.)


This event inspired many people: during the briefing with a quote from Star Trek, and an artist made Pluto look like the Death Star from Star Wars! Awesome!


On #PlutoFlyby, a quote from #StarTrek: @NASANewHorizons' mission is 'to boldly go where no man has gone before'. When reality meets #Scifi…

I know, #Pluto images are everywhere now but this one made by @Kenetor made my day. #DeathStar #StarWars pic.twitter.com/pXBHbsrQPp


A few days after Pluto Flyby, as we thought we couldn't get more surprises from the Universe, NASA's Kepler Space Telescope had spotted the most Earth-like alien planet yet discovered — a world called Kepler-452b that's just slightly bigger than our own and orbits a sunlike star at about the same distance Earth circles the sun. (Read more on the planet here).


It's great: @NASAKepler will host a media teleconference on Thursday at noon to announce latest #Kepler discoveries! pic.twitter.com/ezd9lKQAsD


Needless to say the announcement of Kepler-452b was a huge one for Max! Communications were good and she was able to watch the hangout...


Talking about 'reconnaissance', Max is again facing another strange event as she approaches near Kepler-186f...


I noticed there is like a cloudy magnetic field surrounding #Kepler-186f… Is it meant to prevent anyone to come too close?! #JourneytoKepler


What will come next? Stay tuned!

Learn more on Kepler-186 and the Solar System (2014) and on Kepler-452b. Check the website: Kepler A Search for Habitable Planets for news, and this page for images. And of course, you can follow @NASAKepler on Twitter.